You know that smoke alarms play a critical role in your everyday safety, but what kind should you pick? If you’re unfamiliar with the options, the distinctions can be confusing.

This simple smoke alarm guide breaks down the differences between the two most common variants of smoke alarms: Photoelectric and ionisation devices.

How Do Photoelectric and Ionisation Smoke Alarms Work? 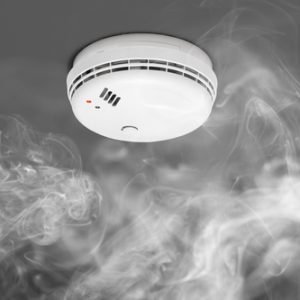 created as a result. When smoke fills the air, it reduces the amount of light that reaches the detector. If the light falls below a certain level, the alarm sounds.

Ionisation alarms depend on radioactive elements that emit low-level radiation. When this radiation comes into contact with air, the air molecules become electrically charged in a process known as ionisation.

A circuit detects the amount of charge in the air compared to a pure reference source. If there’s smoke in the air, it changes the charge, and when the detector notices the difference, it triggers the alarm.

Due to the distinctions in how they work, ionisation and photoelectric alarms exhibit varied performance characteristics.

These alarms have an increased sensitivity to the minuscule particles typically produced by blazing flames. Although most commercial models satisfy the minimum requirements found in Australian Standard AS3786:2015, fire-safety professionals generally share the opinion that they fail to provide proper warnings in many hazardous situations.

Ionisation devices are also susceptible to annoying false alarms that might influence people to turn them off and place themselves at risk. Experts also cite the fact that many ionisation alarms fail to respond to fire situations as consistently as they should.

As per the new legislation effective Jan 2017, ionisation smoke alarms are no longer allowed to be installed.

Although these alarms aren’t as quick to detect small particles, they’re much better at sensing the presence of smouldering flames. Many house fires smoulder and emit large particles for some time before reaching the blazing stage. The early warnings that photoelectric alarms can potentially provide might amount to a life-saving difference.

Photoelectric technology that complies with AS3786:2015 is less likely to produce false alarms while you’re cooking or conducting other normal household activities.

Which Smoke Alarm Should You Pick?

Most Australian fire safety professionals favour photoelectric smoke alarms, but this isn’t just a matter of personal preference anymore. In addition to the benefits that you’ve just learned about, these smoke alarms are now the standard across the nation.

Australian fire authorities from every state promote the installation and use of photoelectric smoke alarms. The Northern Territory and Queensland have even gone so far as to mandate that nonfunctional ionisation alarms must be replaced with photoelectric alternatives that are either

In Queensland, homeowners also need to install interconnected smoke alarms in their bedrooms, the hallways or intermediary spaces between bedrooms and other parts of the home, and likely exit paths on storeys that lack bedrooms.

When alarms are interconnected, it doesn’t matter which one detects the fire first. If any individual device sounds, they all follow suit. Such devices could make it easier for a building’s occupants to escape or call the fire brigade.

Do You Need to Make the Switch?

Smoke alarm recommendations aren’t just for homeowners. Those who lease or sell property need to ensure that they comply as well.

Upgrading to photoelectric alarms could do more than just save your life. It also protects the other people who use your property.

For more information or a quote to upgrade to the latest legal requirements, contact us today on (07) 5522 5222 or email us at info@ampdes.com.au and one of our team members with get back to you as soon as possible.